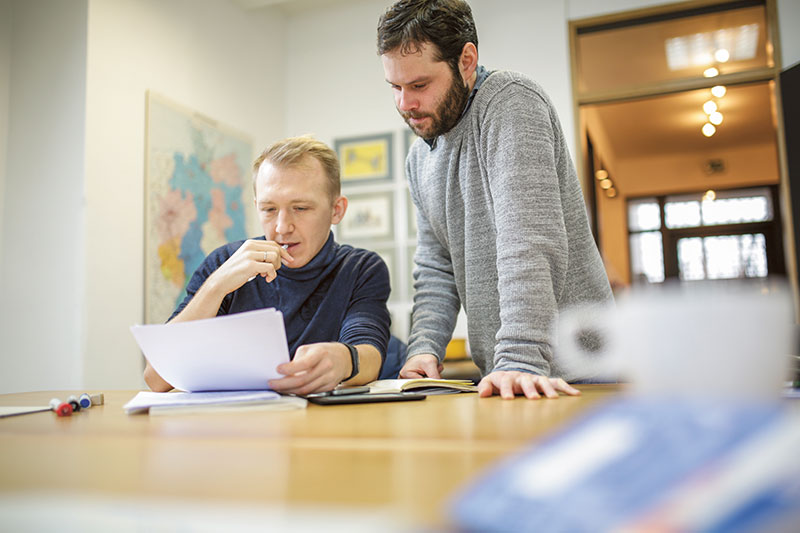 A large, internationally positioned company based in Bamberg has several hundred employees. Most of the work is conducted in English which is perfect for employees coming from abroad. But for these international employees existed another challenge, they had to conduct their lives outside of work in German. Everything from communicating with authorities, day-cares and schools to grocery shopping and cultural life had to be done in German. Besides, not all of the colleagues spoke perfect English, and so meetings would change quickly into German, especially if the discussion got intense. In order to make life in Germany a bit easier, the company arranged German training courses for its employees, either one-on-one or in small groups. The course content was developed in cooperation with the employees themselves and their supervisors. The result was that after having German classes regularly at work, the employees speaking competence increased and the number of miscommunications decreased. This led to higher productivity, and was therefore an investment which paid off.

An animal hospital in Lower Franconia employs many veterinarians from outside the EU. In order for them to be allowed to practice in Germany, they must present a certificate of language ability at a B2-level. The veterinarians received lessons several times a week together as a small group, meeting at the Sprachinstitut TREFFPUNKT in Bamberg. In their German class they not only covered general language topics, but also medical terms and expressions so that they could benefit immediately from their newly acquired knowledge. The entire team was happy. It is to their advantage to be able to communicate clearly and smoothly, especially in medically precarious situations. Directly at the end of the course, the veterinarians could take their required test, the B2 telc German exam, at the Sprachinstitut TREFFPUNKT.

The client was a consulting firm in Bamberg whose employees mostly didnt come from Germany and didnt speak any German when they started working for the company. As a rule, all new employees receive German training on site at the company. That way the new international employees can get used to their new surroundings and they learn to speak German quickly. The families of the new international employees also receive German lessons so they can get on with their daily lives as well. This benefits all parties. The employees and their loved ones learn to feel comfortable in their new surroundings and the company creates a sense of loyalty having made a meaningful investment in their team.

Companies are not only interested in group classes. In the next section, youll see a clear example of how one-on-one classes at the company can be useful.

A medium-sized company in the area surrounding Bamberg had a very good and very important employee who was of non-German heritage. When she spoke German, you could hardly hear her accent. Writing, on the other hand, was very difficult for her. A growing proportion of work communication started to be in written form. She had to compose emails, create quotations and answer queries, all in German, in order to represent the company in a professional way. The German training sessions for this employee were especially demanding, where the writing exercises focused not so much on German grammar, but rather on spelling. Das Sprachinstitut TREFFPUNKT is your perfect partner in such special cases. As per our motto, Everyone can take the easy road. We like the hard road. -  Your experts from Sprachinstitut TREFFPUNKT